Playing on the Internet, I found a fire and rescue apparatus broker that had a very interesting web page, after a few late nights on the web, I found a fire engine that I liked and put a bid on it.

This photo looked real nice, but they didn’t tell me that it was an old photo!

After driving 44 hours to bring the fire truck home, It took eleven days to strip the truck down. I had all the paint removed using a method called plastic media developed by the Airforce to strip down fighter jets without any damage to the metal.

We had lots of fun after the renovation and re-lettered it with the family name and the number 88 because that is the year my son was born. The goal was to complete the renovation in time for the 4th of July parade in Highland Park, Texas. With RSVP’s from 29 excited kids to ride, the pressure was on.

I took two weeks off and we worked on the truck fifteen hours a day for two weeks. The truck was completed July 2nd, 1998. I let the kids ride on top and with lights and sirens we made our presence known as the kids threw off about 150 lbs. of candy! After the parade I cooled the kids down with 750 GPM of H2O until their parents arrived.

Tom Corcoran (CEO of Felcor Lodging Trust) purchased the truck from Doster Lighting, Inc. in November of 1998. He gave it to Don McNamara as a Christmas gift. Don owns Speedzone and is an investor in Felcor Lodging Trust. Don keeps the fire engine at the McNamera Ranch on Cedar Creek Lake in Texas. 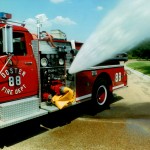 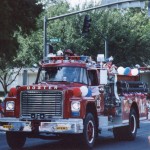 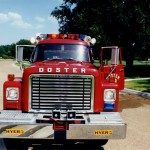 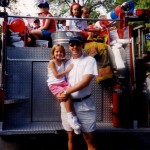 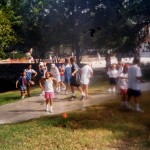 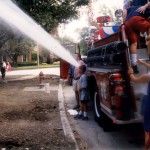